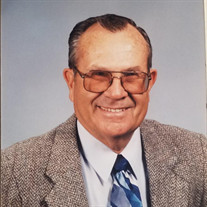 Wayne Franklin Harris passed away in Porterville, California, after a short illness, on December 31, 2020 at the age of 91. He was born on January 6, 1929 in Carnegie, Oklahoma as the oldest son of Oscar and Frances Harris. The Harris family moved to Anaheim, California in 1937, where Wayne attended Elementary School. The family later moved to Porterville, California, where Wayne attended and graduated from Porterville High School in 1947. Wayne started college but postponed his education when he joined the United States Air Force during the Korean War. After he served overseas, he completed his service and returned to college. It was during this time that he met Janette Wallace. They were married in 1955 at her sister’s country home in Porterville. Wayne and Janette moved to San Luis Obispo, California where he obtained his degree in Civil Engineering from Cal Poly University. During their time in San Luis Obispo their daughter, Ellen Harris Schodrowski, was born in 1957. After taking an engineering job for the city of Bakersfield, the birth of their son David completed their family in 1959. Wayne worked as a Civil Engineer in several California cities. He moved back to Porterville in 1965 to work for the City of Porterville, as the Public Works Director. After several years with the city, he opened his own engineering and surveying firm. He retired in 1991. Wayne remained actively involved, on a part-time basis, with his son David at the family business CTL until 2015. Wayne enjoyed traveling and spending quality time in the Gold Country and the Central California Coast. He was an active member of the Christian church. Wayne especially enjoyed having coffee at Perko’s Restaurant with his friends. Wayne is preceded in death by his parents, Oscar and Frances Harris, his wife, Janette Harris and brother, Vernon Harris. Wayne is survived by his son David Harris (Christina); daughter, Ellen Schodrowski (Craig); brother, Bill Harris; widowed companion, Brenda Evans; grandchildren, Bethany Harris, Dustin Harris, Faith Harris, Zachary Boudreaux, Allison Fitzsimons (Robbie), Aaron Racca (Vanna); and great grandchildren, Maddison and Kalee Racca. He also leaves behind several nieces and nephews to cherish his memories. A private family service will be held at Myers Chapel on Friday, January 15, 2021. You are invited to attend via google meet. If you are interested in doing so, please email: [email protected] In lieu of flowers, donations may be made in Wayne’s name to the Heart Association or a charity of your choice. To share a memory or express condolences, please go to www.myersfuneral.com/obituaries. Funeral services are provided by Myers Funeral Service & Crematory in Porterville.

Wayne Franklin Harris passed away in Porterville, California, after a short illness, on December 31, 2020 at the age of 91. He was born on January 6, 1929 in Carnegie, Oklahoma as the oldest son of Oscar and Frances Harris. The Harris family... View Obituary & Service Information

The family of Wayne Franklin Harris created this Life Tributes page to make it easy to share your memories.

Send flowers to the Harris family.