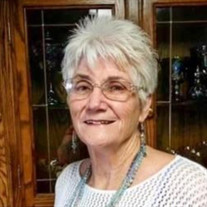 Your death has left us a heartache that no one can ever heal, but your love is a heartache that no one can ever steal… Norma Jean entered this World on July 30th, 1934 to Roy and Flossie Sexton. She was an exceptional Daughter, Sister, Wife, Mother, Aunt, Grandmother, Great Grandmother and Friend. Norma was kind, generous, strong and had a smile that lit up every room she entered. Her faith in Jesus was powerful and she spent most Sunday’s singing at the Woodville Assembly of God Church. In the 60’s Norma moved from Missouri to Woodville and started working for the Porterville State Hospital. She quickly realized her fate was to work with the handicapped. She opened Johnson’s Nursery in 1976 and taught kids to walk, talk, and to interact when they were told they would never be able to. Norma Jean was way ahead of her time in creating sensory activities to stimulate the minds of the children in her care. It is said to this day by many that Johnson’s Nursery was the best care home in California. She was diligent, determined and witty and taught us all to work hard and love what you do. Norma retired in 2014 and left the industry wishing she hadn’t. To her grand and great grandchildren, “Gram’s” home and backyard were lively and interesting, far more entertaining than an amusement park. Norma would also spend hours cooking to ensure family and friends would gather for the Holidays and Sunday dinners. She changed the lives of so many and never spoke ill of anyone. She saw the very best in every individual. Norma Jean left our sight on September 5th, 2021. She now joins her loved ones that preceded her in death, her beloved parents; her brothers, Raymond and Bill Sexton; daughter, Barbara Jean Hart; first husband, Milford Franklin Hart; and second husband, Carl Elmo Johnson. She is survived by her sister, Peg Spillers; children, Carlis Edward Johnson (Jennifer), Debbie Rogers (Alan), Sandy Finley (Ed), Tammie Rhodes (Jerry); grandkids, Janet Hance, Mende Darling (Aaron), Shanon Scalia (Joseph), Thomas Brown (Jennifer), Heather Ayon (Mark), Carl Burrell, April Nordin (Brian), Tiffeney Bigger, Cory Johnson (Chelsea), Carley Johnson, Anthony Brown (Kindi), and Nicholas O’Neal (Megan); 28 great grandchildren; and 3 great-great grandchildren. A heart that's broke is a heart that's been loved….she was our rock, our confidant and will live in each of our hearts forever. A Graveside service will be held at Woodville Cemetery on Tuesday, September 14, 2021 at 2:00 PM. Flowers can be sent to Myers Funeral Home, 248 N E St, Porterville, CA 93257. To light a virtual candle, share a memory, or express condolences to the family, please visit the tribute section of our website at www.myersfuneral.com/obituaries. Myers Funeral Service & Crematory in Porterville is in charge of arrangements.

The family of Norma Jean Johnson Hart created this Life Tributes page to make it easy to share your memories.

Your death has left us a heartache that no one can ever heal,...