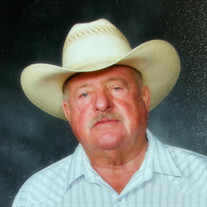 Merion Jedd "Tito" Vance passed away in Fountain Springs, CA on Tuesday, August 18, 2020, at the age of 75. Tito was born in Colonia Chuichupa, Chihuahua, Mexico on March 11, 1945. When he was three years old, he and his parents, Mariano and Bertie Vance, moved to Colonia Juarez, Mexico. He attended Colonia Juarez Elementary and Juarez Stake Academy (1963). He received both an English and Spanish education. While in high school, he was senior class president and played on the varsity basketball team. He was selected to play on the 1963 Chihuahua State All Star team. He was active in Boy Scouts and was the third person in Mexico certified as an Eagle Scout. He enjoyed spending summers and weekends on the mountain ranch where his dad worked. He loved to fish the local trout streams in Mexico and the Porterville area. In 1963 he came to Porterville to play basketball at Porterville College. He graduated in 1966. He then attended Cal Poly San Luis Obispo before being drafted into the Army in 1968. While attending Porterville College, he met the love of his life, Diana Ferrero. They were married October 1968, three weeks before Tito left for Vietnam. After his tour, he was stationed in Colorado Springs, Colorado for 6 months. While in Colorado, due to his service in Vietnam, he was granted his US citizenship. He was proud of his military service and the country he served. After returning to Porterville, he and Diana eventually bought their Fountain Springs home in 1973 where they both enjoyed country living. Tito spent thirty years in the finance business. He retired from American General Financial Services after spending many years as manager in the Porterville office. He was preceded in death by his parents Mariano and Bertie Vance; and sister, Judy Vance. He is survived by his wife of 51 years, Diana Vance; siblings, Merrill Vance (Carol), Janette Birdno (Mike), Rita Sandler (Ron), Lynn Vance (Heather); nephews, Marion Vance, Merrill Birdno, Curtis Birdno, Logan Vance, Tyrell Vance, Chandler Vance; nieces, Sandy Wells, Delana Wax, Katrina Vance, Michelle Smith, Amy Solheim, Megan Michaelsen; and many great-nephews and nieces. In lieu of flowers, donations may be made to the local Boy Scouts, the NRA, Disabled American Veterans, or a charity of your choice. Due to the current Covid-19 situation and weather conditions, we will celebrate the life of this wonderful man at a later date. To sign the family guest book or send condolences please go to www.myersfuneral.com. Myers Funeral Service & Crematory in Porterville is in charge of arrangements.

Merion Jedd "Tito" Vance passed away in Fountain Springs, CA on Tuesday, August 18, 2020, at the age of 75. Tito was born in Colonia Chuichupa, Chihuahua, Mexico on March 11, 1945. When he was three years old, he and his parents, Mariano and... View Obituary & Service Information

The family of Merion "Tito" Vance created this Life Tributes page to make it easy to share your memories.

Send flowers to the Vance family.