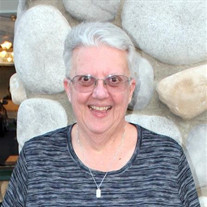 Marcia Elaine Brown Our beloved Cousin and Niece, Marcia Elaine Brown passed away on Thursday, August 26, 2021. Marcia was born June 15, 1955, to Roger and Barbara Brown. She was a 4th generation Californian and was proud of her roots in this area. In her early years, she enjoyed spending summers at the family cabin in Camp Nelson. She was active in Job’s Daughters and graduated from Porterville High School in 1973. While at Porterville High, she was active in the Z Club and choir. She attended Porterville College, Fresno State University and Francis Marion University in South Carolina. She graduated from Francis Marion with a BS Degree in Medical Technology and was also a member of the Omicron Delta Kappa Honor Society. During her college years she worked at the Good Shepherd Lutheran Home and also for Fridlund Laboratories in Porterville. While working in the laboratory, she developed a great interest and chose to pursue a further degree in the subject. She was a Clinical Lab Scientist and this led to working for Sierra View Medical Center for over 25 years. Wanting to see more of the country, she signed up to be a “Traveler” working in hospital labs. This took her to many different areas in the United States until the Carteret General Hospital in Morehead City, North Carolina didn’t want her to leave and offered her a job she couldn’t refuse. She enjoyed her time in the South and made many wonderful friends there. In June of 2015, following the death of her mother, Marcia returned to Porterville to settle once again. She returned to work part time at Sierra View and enjoyed seeing all her friends and family. In 2017 she joined the Porterville Zonta Club and truly enjoyed being a member of such a wonderful group. Marcia was such a giving and kind individual. She loved to cook and enjoyed preparing holiday meals for friends and relatives. Dorm boxes, for friends and relatives going away to college, were a special gift she was known for. Marcia is survived by her Uncle Adair Brown of Davis Creek, CA., Aunt Thelma Hawkins of Florence, South Carolina, several cousins and close treasured friends. Marcia was preceded in death by her parents, Roger and Barbara Brown and sister Kerry Brown. Memorial contributions can be made to “Zonta Club of Porterville” at P.O. Box 2055, Porterville, CA. 93258. Marcia was chairman of the Zonta Scholarship Committee and contributions will go to this fund. Graveside Services will be held at Hillcrest Memorial Park, Porterville, California on Thursday, September 16, 2021, at 11 am. To light a virtual candle, share a memory, or express condolences to the family, please visit the tribute section of our website at www.myersfuneral.com/obituaries. Myers Funeral Service & Crematory in Porterville is in charge of arrangements.

Marcia Elaine Brown Our beloved Cousin and Niece, Marcia Elaine Brown passed away on Thursday, August 26, 2021. Marcia was born June 15, 1955, to Roger and Barbara Brown. She was a 4th generation Californian and was proud of her roots in... View Obituary & Service Information

The family of Marcia Elaine Brown created this Life Tributes page to make it easy to share your memories.

Send flowers to the Brown family.