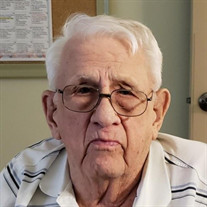 It is with deep sorrow and much love that we mourn the passing of our beloved father, grandfather, and great-grandfather Lonnie Eugene Goldman Lemons, of Hamilton, Mt on the 7th of October 2021. Lonnie just turned 88. Lonnie leaves behind a great legacy of family with his three children, Trish Huff (neé Lemons) and her husband Dan of Alberton, Mt, Lannie Lemons of Victor, Mt, and Larren Lemons and his wife Dee Dee Lemons of Missoula, Mt. Lonnie has 11 grandchildren and 12 great-grandchildren who will miss him dearly. Lonnie is also survived by two brothers, Lester Lemons and his wife Betty, Leonard Lemons and his wife Linda, and three sisters Lavada Hall (neé lemons), Linda Floyd (neé Lemons), Jessie Henshaw (neé Lemons), and two sisters-in-law, Linda Whitaker (neé Black) and Donna Black. Lonnie was uncle to numerous nephews and nieces. Lonnie was a friend to all and will be missed. Lonnie was preceded in death by the love of his life, Nadine Lemons (neé Black), who shared in his life for forty years and with Jean Brown, with whom he was married to for eleven years. Lonnie was also preceded into death by both of his parents, Chester and Glinnie Lemons (neé Cole), his in-laws, Donald Black and Ora-Lee (neé Shoemake) and his two sisters Lovie Bodine (neé Lemons) and Lenora Perrett (neé Lemons), his brother, Lindsay Lemons and his sister-in-law Betty Borjon (neé Black). Lonnie was born in Bethel Oklahoma on August 22nd, 1933. With his parents and siblings, Lonnie moved to Woodville, Ca in 1940, escaping the harsh realities of the Dust Bowl and hoping for a better life in California. Once old enough to serve, Lonnie joined the United States Airforce and served during the Korean War. It was on July 11th, 1959 that Lonnie’s story truly began for him. Lonnie met Nadine when she was working at a little restaurant called The Snow-White Drive-in in Porterville, Ca. According to Nadine, Lonnie resembled Paul Newman and that, with his persistence and charm, won her heart and they were married at her parents’ home. Together, and with their three children, they manifested the age-old Okie spirit given to them from their parents and they made a wonderful life for themselves. Lonnie owned several businesses throughout California at different times, with his most notable being the Hoff Brau in Porterville. Lonnie did not know a stranger, all who met him were soon a friend and he remembered them, and doubtfully, they forgot him. What made Lonnie so charming was his gift as a storyteller; whether one was in the mood for it or not, was not his first concern. Lonnie engaged you with his insight, intellect, and compassion. Lonnie loved the word of God and he knew it well. This compassion and love of God allowed Lonnie to embrace others, display forgiveness, and sow generosity. Lonnie was known as a spitfire in his youth, yet he redeemed himself as he matured into the wonderful man, we all knew him to be. Though we are saddened and grieved to lose such a lovely and important man, we are also full of joy that he has gained his wish to be with the Lord and be back in the arms of his best friend and love of his life. Lonnie will be laid to rest in his hometown of Porterville, Ca at Hillcrest Memorial on the 14th of October 2021. Please contact the family for details specific to the funeral, it will be a small and private ceremony to mourn our loss and celebrate his life.

It is with deep sorrow and much love that we mourn the passing of our beloved father, grandfather, and great-grandfather Lonnie Eugene Goldman Lemons, of Hamilton, Mt on the 7th of October 2021. Lonnie just turned 88. Lonnie leaves behind a... View Obituary & Service Information

The family of Lonnie Lemons created this Life Tributes page to make it easy to share your memories.

It is with deep sorrow and much love that we mourn the passing...

Send flowers to the Lemons family.