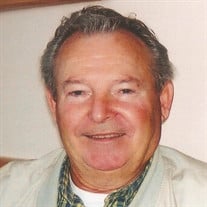 Josip Prahovic of Porterville, California, passed away on January 1, 2022, at the age of 88. He was the beloved husband of his devoted wife of 59 years, Viktorija, and the beloved father of his son, Martin. Josip’s life was something of an odyssey. He was born in Kamanje, Croatia. He was the youngest of the nine children of parents Martin and Dora Prahovic that survived to adulthood. As a teenager, in the aftermath of the Second World War, he left his impoverished homeland and ended up in Displaced Persons camps, first in Austria and then in Germany. From there he immigrated to New Zealand, then to Canada, and finally to the United States, settling in California. Josip and Viktorija operated the Victoria Cafe at the southeast corner of Highway 65 and Avenue 56 in Ducor. There they served up traditional American diner-style food to hungry local farmers, farm workers, townspeople, truckers, and travelers. They did this from 1975 to 1979. After some years enjoying life in the country on the outskirts of Manchester, Tennessee, they returned to Ducor to run the cafe again, from around 1985 to 1991, when they finally sold the business. Afterwards they settled in Porterville. Josip will relocate one last time: he will be buried in his native village of Kamanje, Croatia. Josip is survived by his wife Viktorija and son Martin and by nieces, nephews, godchildren, and dear old friends in southern California, New York, Canada, Croatia, Slovenia, Australia, and New Zealand. A Visitation and viewing will be held at Myers Chapel, 248 North E Street, Porterville, CA 93257 on Tuesday, February 15, 2022 from 4:00 PM to 7:00 PM; with a rosary at 6:00 PM. A Mass of Christian Burial will be held at St. Anne’s Church, Porterville, CA on Wednesday, February 16, 2022 at 11:00 AM. Interment to be private. To light a virtual candle, share a memory, or express condolences to the family, please visit the tribute section of our website at www.myersfuneral.com/obituaries. Myers Funeral Service & Crematory in Porterville is in charge of arrangements.

Josip Prahovic of Porterville, California, passed away on January 1, 2022, at the age of 88. He was the beloved husband of his devoted wife of 59 years, Viktorija, and the beloved father of his son, Martin. Josip&#8217;s life was something... View Obituary & Service Information

The family of Josip Prahovic created this Life Tributes page to make it easy to share your memories.

Josip Prahovic of Porterville, California, passed away on January...

Send flowers to the Prahovic family.