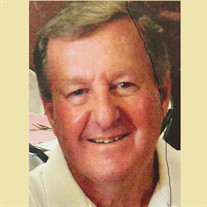 John Harold Christl, 82, took his final flight on Saturday, April 9th, 2022, in Des Moines, Iowa with his faithful co-pilot of 60 years right by his side. John was born on the 4th of July, 1939 in Glendale, CA to Harold and Marguerite (Truesdale) Christl. In 1942 John moved to Porterville, CA with his parents and 2 brothers, Bob and Gary. He attended St. Anne’s Catholic school from 1st to 8th grade where he and his brothers were altar boys. He graduated from Porterville High School in 1957. ohn spent his first summer out of high school with his buddy, Dale Gill, working on a ranch in Winnemucca, NV and then enlisted in the U.S. Navy at 18 years old. He was stationed at Barbers Point Hawaii and flew with the Early Warning System through the Aleutian Chain in Alaska. While home on leave, he met Joanie and they were married the following year in 1962! John worked for Raytheon in Southern California and then at Pt. Mugu Pacific Missile Range. He and Joanie moved back home to Porterville, to start their family (Jori, John, and Steve). This would be the family that traveled with the mobile home industry from Texas to Idaho, and Kansas before answering the call of owning his own business and settling in Gardnerville, Nevada in 1975. Nevada brought another son (Michael) to the family and a 43-year career of owning and operating All-American Tire & Auto Repair. John loved to be where his family was, whether that was HOME with the kids and grandkids, pretending to be asleep but really hearing everything, fishing and hunting with his dad and uncles or watching Nascar on TV. He loved going to car shows, air shows and playing ping pong, swimming and skiing, tacos and chili dogs (food in general, especially Joanie’s cooking), taking care of his 40 acres of alfalfa, and loading up the whole family to take the famous Sunday drives usually ending at the local airport looking at planes. He eventually owned his own Cessna 210 and fulfilled a lifelong dream of being a private pilot making trips to Oshkosh, California and Oregon to make sure family members were able to attend special events. After retirement he and Joanie took a cross country trip with longer stays in Texas and Iowa. The scenery was different and the Sunday drives could now happen any day of the week but his co-pilot always stayed the same, never wavering in her support and love of her “Johnny boy”. We have an enormous appreciation and love for the HEARTfelt care the North 6 nurses, doctors, and aides at Unity Point Health-Iowa Methodist Medical Center showed our family. The Unity Point Hospice Team was phenomenal in our time of need, as well as, the Iles Funeral Home in Des Moines. If you feel inclined please consider a donation in the name of John Christl to: Unity Point Health Des Moines Foundation (hospice), the Michael J. Fox Foundation for Parkinsons or hug a local hospital worker. They made an extremely tough time bearable and one we will never forget. John is survived by his wife of 60 years, Joanie, daughter Jori Halbirt (Mike), son, John Christl (Robyn), son, Steve Christl (Colleen), son, Michael Christl, his beloved grandkids Kaitlyn, Matthew, Lauren, Alyson, and Sarah, and brothers, Bob Christl and Gary Christl (Gloria) He is preceded in death by his parents Harold Christl and Marguerite Butt, his in-laws Carson and Fay Dykes, and his brother-in-law, Carson Dykes. A viewing will be held at Myers Chapel, 248 N. E St., Porterville, California on Tuesday, May 3, 2022 from 9:00 AM to 10:30 AM. A Mass of Christian Burial will be held at St. Anne's Church, 378 N. F. St., Porterville, California on Tuesday, May 3, 2022 at 11:00 AM. Interment to follow at Vandalia Cemetery, 565 E. Scranton Ave., Porterville, California. Please join us for a reception right after the graveside service to share stories and a meal at The Porterville Eagles Lodge at 97 W. Henderson Ave., Porterville, California. Myers Funeral Service & Crematory is in charge of arrangements. Online condolences may be made to the family at www.myersfuneral.com

John Harold Christl, 82, took his final flight on Saturday, April 9th, 2022, in Des Moines, Iowa with his faithful co-pilot of 60 years right by his side. John was born on the 4th of July, 1939 in Glendale, CA to Harold and Marguerite (Truesdale)... View Obituary & Service Information

The family of John Harold Christl created this Life Tributes page to make it easy to share your memories.

Send flowers to the Christl family.