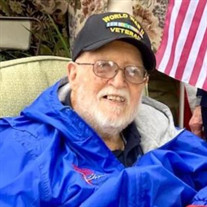 James Everett Howell was born on October 24, 1921, and recently celebrated his 100th birthday with family and friends. On December 2, 2021, he passed away peacefully with his children and grandchild by his side. James was born in Mt. Whitney Hospital (most recently known as the Miller House) on Main Street to Edythe (Althouse) Howell and Everett Howell. He was brought home from the hospital to live in the house on No. “E” Street where he resided until his passing. He only spent four years away from his “E” Street address during World War II, where he served as a Sonarman First Class on the USS Barker, a destroyer which saw action in both the Atlantic and the Pacific theaters during the war. James Howell was a descendent of the pioneer Howell family that settled near Porterville in 1874. James attended all Porterville schools and was extremely musical throughout his Porterville education, playing violin and trumpet. In fact, the “Marching Through Time” band mural in Centennial Park in downtown Porterville has a picture of elementary school student James in knickers playing his trumpet. After graduating from Porterville High School in 1939, he attended Porterville College for only a year before entering the US Navy. During the war, his fiancée Irene Howekamp, a Terra Bella native, traveled by train to the East Coast, and James and Irene were married in Philadelphia on June 27, 1944. When he returned to Porterville after the war with his bride Irene, he joined his father Everett in managing the three existing downtown theaters, the Monache, the Molino, and the Crystal. In 1949, James became manager of the newly constructed state-of-the-art Porter Theater. James liked to say that from 1930, when the Monache closed to put in sound equipment, to 1975, when the Porter closed for renovations, there was never one day that a theater under Howell management was not open to provide entertainment to the community. Special events at the theater, such as the Monache Mickey Mouse Club, Bank Night, the operetta series and the free kiddie matinees following the Children’s Christmas Parades created many memories for long-time Portervillians. Many young people were given their first jobs at the theaters and credit James with teaching strong work and personal ethics. James was a member of the Rotary Club of Porterville for 64 years, serving as President and for over 30 years as Secretary/Treasurer of the Club. For years, James also led the singing at the beginning of the Rotary meetings. He is a multiple Paul Harris recipient and Homer Wood Fellow. Notably, James was born the same week the Porterville Club was chartered. James was able to attend the celebration of the 100th anniversary on October 23, 2021. At the age of 100, he sang the R-O-T-A-R-Y song to the crowd with his usual flair and showmanship. James was also a past president of the Tulare County Sheriff’s Posse, riding in many parades, including the Rose Parade, on his beautiful palomino horse. James also served on the organizing committee for the building of Monache High School. James was a faithful member of Zion Lutheran Church, Terra Bella, for 76 years, and he never failed to read his Bible and devotions daily. Proud of his 100 years of citizenship in this community, James always willingly provided historical resource information for many students, businesses and historians. In 2013, James was the first recipient of the President’s Medal of Distinction at Porterville College. Surprised by the award, he still managed to sing the Porterville College alma mater to the graduating students that night. James was also very proud of being inducted into the Porterville “Wall of Fame” in 2016 for his many contributions to the community. James’s aforementioned love of music was intrinsic to his personality, with eclectic tastes ranging from Big Band to symphonic music. James passed on his talent and passion for music to his granddaughter Elyse, and he especially appreciated attending Elyse’s performances in the Los Angeles Master Chorale, one of the premier choral groups in the country. James is preceded in death by his parents Everett and Edythe Howell and his beloved wife Irene (2001). He is survived by his son Travis Howell, daughters Dianne Howell and Denise Marchant (Lou Marchant), and his granddaughter Elyse Marchant Willis (Dr. Christopher Willis), and his nephew David Howekamp (Marily). Visitation will be held at Myers’s Funeral Service on Tuesday, December 7, 2021, from 4-7 pm. Private graveside services will be held at Zion Lutheran Cemetery in Terra Bella. In lieu of flowers, donations may be made to the Rotary Club International Foundation (www.my.rotary.org), Porterville Strings (www.portervillestrings.org), Zion Lutheran Church Roof Fund, (10341 Road 256, Terra Bella, CA 93270), or the Los Angeles Master Chorale (www.lamasterchorale.org).

James Everett Howell was born on October 24, 1921, and recently celebrated his 100th birthday with family and friends. On December 2, 2021, he passed away peacefully with his children and grandchild by his side. James was born in Mt. Whitney... View Obituary & Service Information

The family of James E. Howell created this Life Tributes page to make it easy to share your memories.

Send flowers to the Howell family.