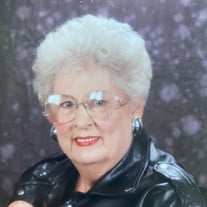 Gwendolyn Louise Lawson, age 90, a resident of Porterville, California passed away on January 16, 2021 in Porterville, California. Gwen was born on September 16, 1930 in Taft, California to Elva and Charles Chubb the XIII. Gwen attended Taft Elementary School from Kindergarten to 7th grade. The family moved to a farm at Drain, Oregon. She attended 7th and 8th grades at Leona School. She graduated Valedictorian of 8th grade class. During that summer the farm burned and the family returned to Taft. Gwen attended Taft High School from freshman to middle of senior year. Her family moved back to Drain, Oregon. She finished senior year and graduated at Drain High School. After graduation the family moved to Oakridge, Oregon where her parents opened a second hand furniture store. Gwen worked as a Soda Jerk and helped publish a merchant’s newspaper until a job was secured at Oakridge branch of First National of Portland Bank. Gwen loved roller skating and became a member of “Ridge Roller” skating club. Gwen also played on the City league Soft Ball team. She met and married Thomas Jackson (Jack) Lawson there. Jack followed Heavy Construction and they moved often. While at Hood River, Oregon her son Terry Lee Lawson was born. Four years later her son Matthew Dean Lawson was born at Redding, California. Gwen was a Den Mother for Cub and Boy Scouts for seven years. She was active in P.T.A. when the boys were in School and was room mother for both boys while they were in elementary school. During her working years she worked for Security Pacific Bank, bookkeeper for Wheelers furniture, and Crocker National Bank in for Central Valley National Bank and did volunteer work at Hughson High School. The family moved back to Porterville and she returned to work at Crocker Bank. Then she worked as a bookkeeper for Newby Brothers Logging and did the books for her son’s masonry business, Matt’s Masonry. She was a member and Past Worthy High Priestess of Sequoia Shrine #64, White Shrine of Jerusalem and member and Past Worthy Matron of Palm Leaf #114 Order of Eastern Star and a member and Past president of 20 And’s Club twice. Member of daughters of the Nile and Nile Club. A member of Porterville Garden Club. She was a volunteer for Pink Ladies at Sierra View Hospital twice and a former member of Native Daughters of the Golden West and Christian Women’s Club. Gwen loved to sew and made most of her own clothes and for the family. She liked to knit, crochet, do needle point and counted cross stich, make beaded ornaments, baking and decorating cakes, doing ceramics, quilting and reading. She loved to play Bunko and Spinners with her friends, go to Plays at the Barn Theater, listen to music and watch home movies on T.V. She liked to go camp out at Cold Springs Saddle and help cut fire wood. She also liked to go to the Death Valley Annual Encampment at Furnace Creek, and spending time with her family and friends. She collected spoons, bells, paper weights, plates, butter dishes, water pitchers, covered candy dishes, perfume bottles, thimbles, pewter figurines, small metallic collector’s boxes and stuffed animals. She was preceded in death by her father, Charles Chubb XIII; her mother, Elva Chubb, her son Matt Lawson; her husband, Jack Lawson; and her many loved dogs and cats. She is survived by her son, Terry Lawson and wife Susan; grandson, Nathan Lawson of Strathmore; her grandson Jeff Lawson; great grandson, Jaxson Lawson; great granddaughter, Katelyn Manley of Porterville; sister, Shirley Swaim of Court d’ Arleen, Idaho; sister-in-law, Marjorie Holmgren of Sun City West, Arizona; nephews, a niece, great nephews and nieces, cousins and her cat cinnamon and many treasured friends. Private services to be held. In lieu of flowers, donations may be made to your favorite charity. To share a memory or express condolences to the family, please go to www.myersfuneral.com/obituaries. Myers Funeral Service & Crematory in Porterville is in charge of arrangements.

The family of Gwendolyn Louise Lawson created this Life Tributes page to make it easy to share your memories.

Send flowers to the Lawson family.