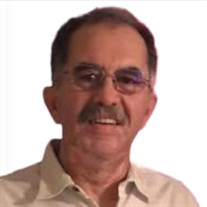 Armando “Herman” Arispe, was born on June 5, 1957 and passed away on January 21, 2022, at his home in Porterville at the age of 64. Armando grew up with six brothers and four sisters in Zeeland, Michigan. He served his country as a Marine from 1976-1981. He was a beloved husband, brother, father, father-in-law and grandpa, but most of all a friend that would welcome you into his family. He is survived by his wife, Rafaela Aripse of Porterville; children, Norma Tamez of Porterville, Mari Acosta of Sacramento, Robert Arispe of Alabama, and Michael Arispe of Porterville; ten grandchildren; brothers, Arnold and Alex Arispe (of Michigan), Benito, Carlos and Freddy Arispe (of Texas); and sisters, Josefina Silva, Irene De La Luz, Ysidra Arispe and Anita Mireles (all of Michigan). He is preceded in death by his parents, Juan and Guadalupe Arispe; and his brother, Juan Arispe, Jr. A Celebration of life will be held at Myers Chapel on Friday, January 28, 2022 at 11:00 AM. Interment to be private. To light a virtual candle, share a memory, or express condolences to the family, please visit the tribute section of our website at www.myersfuneral.com/obituaries. Myers Funeral Service & Crematory in Porterville is in charge of arrangements.

The family of Armando "Herman" Arispe created this Life Tributes page to make it easy to share your memories.

Send flowers to the Arispe family.